About three years ago I was recruited to be the stunt and fight coordinator for a new local movie that was scheduled to begin filming in Corydon and New Albany Indiana. I worked in the ring with two local actors for almost a year at Terry Middleton’s  4th floor boxing gym in New Albany Indiana.

Although Covid 19 slowed us down, with a lot of hard work and determination from the crew, and especially Mr. Tyler Samson who directed the film, it was completed early this year.

It opened on the big screen in Corydon on March 12th, 2021 and is playing limited big screens in the Midwest. To see the cool awards this movie has already won, visit the Facebook page. We hope to get news soon of when A Father’s Fight will be in stores and/or streaming.

I had a small role in the movie as the corner man and trainer for one of the fighters. Go See This Movie! 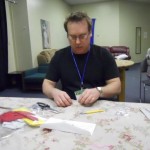 Alesia Getting Ready To Workout!

Sharing A Little Magic With Our Future Leaders!